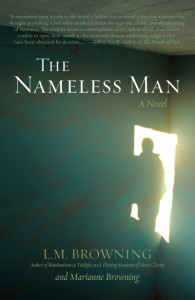 A novel by L.M. Browning and Marianne Browning

Traveling through the Holy Land, eighteen strangers are forced to take refuge in Jerusalem during a militant attack. Kept in close quarters in an abandoned building, over the course of four days this group of strangers begin a dialogue, discussing love and evil, religion and god; finding amongst their number a mysterious nameless man who poses a revolutionary perspective on these age-old questions.

Journeying on his own pilgrimage as he attempts to come to terms with the violence, betrayal, and condemnation of his past, this nameless man reluctantly steps forward to share the realizations he has gathered over the course of his borderless life, leaving those who listened forever changed by the radical transition of perspective his revelations bring about.

Following in the tradition of other contemplative writers such as Hermann Hesse, James Redfield and Paul Coelho, the authors present us with a reflective tale chronicling one man’s spiritual journey across time and beyond the boundaries of our preconceived notions. The Nameless Man will speak to spiritual explorers of all faiths. The story within is a guide for all those making the transition from rigid doctrine and into the intimacy of spirituality. This adventure will challenge all traditional definitions, widen your mind and ignite your will to take up your own inner-pilgrimage in search of firsthand truth.

Advance Praise for The Nameless Man

“A mysterious man travels to the world’s holiest city to reveal a timeless wisdom–this thought-provoking novel takes us on a journey through life, death, and the meaning of existence. The authors weave a contemplative story, rich in detail, that invites readers to open their minds to the universal themes underlying religion that have been obscured by doctrine. Have your highlighter handy to savor each morsel of insight.”

—Jeffrey Small, author of The Breath of God

“What do you believe? Is humanity flawed and fallen, permanently separate from a perfected, transcendent divinity? Or, is human life inherently divine? Is the human journey itself an evolutionary process leading toward greater embodiment of our own divine nature? The world and its troubles appear differently depending upon which view you hold.

“In the midst of these views, throughout human history, there have been people of wakefulness who have come to teach us. They have come to shake us from our consensual trance of forgetfulness. They wake us up. They remind us who we really are. They come to save us from ourselves.

“In this remarkable tale, poet and writer L.M. Browning introduces us to just such an individual. The Nameless Man is a story that will grab you by the heart and take you on a journey. In a beautiful and seamless way, the characters become members of your own family. Before the end, The Nameless Man is your brother and your teacher. When you finally look up from the pages of this book, you may just find yourself in a different world than the one you thought you were born into.”

“The Nameless Man is the story of a man who declines to give his name, visiting Jerusalem, and seeking shelter in an abandoned house along with other pilgrims, while sectarian violence rages outside. Much of the novel involves the nameless man giving speeches, and thus the story can be compared to other philosophical novels like Daniel Quinn’s Ishmael, or even Gibran’s The Prophet. Yet there’s something different here: clues about the nameless man’s identity are dropped early, and I enjoyed the puzzle of guessing his name and the anticipation of finding out near the end whether I was right. Further, the nameless hero doesn’t merely descend from on high to tell it like it is: he has a struggle of his own to complete, and by the end of the novel it is mostly resolved—mostly, but not completely, thus preserving the novel’s dramatic tension. The author’s strong grasp of philosophical concepts and of human relations, added to a touch of rage at the social injustices perpetrated in the name of religion, make the reading very satisfying.”

—Brendan Myers, author of the Fellwater series, The Earth, The Gods and the Soul, and Loneliness an Revelation