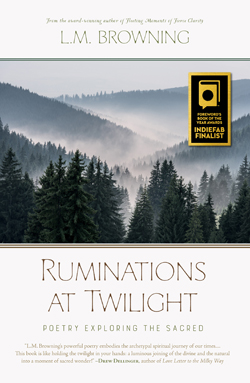 Finalists for Foreword Reviews’ IndieFab Book of the Year Awards have been announced. Ruminations at Twilight: Poetry Exploring the Sacred was nominated in the Body, Mind & Spirit category!

Each year, Foreword Reviews shines a light on a select group of indie publishers, university presses, and self-published authors whose work stands out from the crowd. In the next three months, a panel of more than 130 volunteer librarians and booksellers will determine the winners in 66 categories based on their experience with readers and patrons.

“The 2015 INDIEFAB finalist selection process is as inspiring as it is rigorous,” said Victoria Sutherland, publisher of Foreword Reviews magazine. “The strength of this list of finalists is further proof that small, independent publishers are taking their rightful place as the new driving force of the entire publishing industry.”

Look for the new edition of Ruminations at Twilight on Amazon, B&N, and wherever books are sold. Order signed editions with the award seal on the store or on HomeboundPublications.com