Moving Mandala of the  Soul | Fleeting Moments of Fierce Clarity 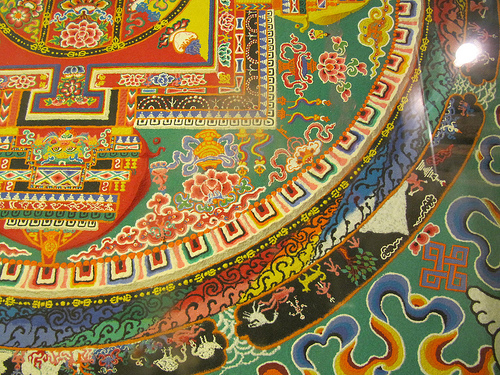 Moving Mandala of the  Soul

—A Journal and Poem Selection from Fleeting Moments of Fierce Clarity

My spirituality is a braid of many faiths. Raised a Catholic, I spent many years studying the Catholic/Christian traditions including the apocryphal gospels. Eventually, I moved beyond this doctrine and went on to study Judaism, Buddhism, and shamanism before finally moving into my own spirituality.
Hints of each faith I studied have stayed with me over the years. One need not be a part of a religion to respect its tradition. One such set of teachings I admire is Buddhism. I do not consider myself a Buddhist; nevertheless, I believe there to be wisdom in the tradition. This poem sprang from one such Buddhist practice I respect: The making of a mandala.
The first question asked by those who read this poem is: What is a mandala? The sand mandala is a Tibetan Buddhist tradition involving the creation and destruction of murals composed of colored sand. Monks and nuns work on a mandala for several days—devoting great effort to its design and creation. Then, when the mandala is complete it is ritualistically destroyed—swept away. The sand is then gathered and poured out into a river or ocean, where it will be distributed by the tides and currents—released throughout the world, acting as a blessing. The creation, destruction, and scattering of a mandala symbolizes the Buddhist doctrinal belief in the impermanent nature of all things.
Fleeting Moments of Fierce Clarity—this work’s namesake—is my realization that the process of defining ourselves is much like making a sand mandala. We define the edges of our soul—the aspects of our identity—only to evolve. While it might seem we are periodically destroyed by hardship and change, we can, in time, discover it was not a violent end; rather, it was a death that led to a needed rebirth.

Moving Mandala of the  Soul

Years spent defining this self
—Carving out the edges of this mind—
The channels of this spirit.

Now to take that sculpture of identity,
Which over time becomes the mask,
And shatter it.

To achieve perfect knowledge
Of the soul within—to experience
That fleeting moment
Of fierce clarity.

To grasp the known
And then transform again
Into the unknown.

Then regathered
To make a new form.

Definition and evolution.
Empowerment and surrender.
We come into knowing
Then set back out as the student.

The child and the elder
Are one and the same.

We are free
Only when we allow ourselves
To be boundless.

Do not drive yourself insane
Longing for the destination.
Live while on the journey.