The Nameless Man Relaunch | An Interview with L.M. Browning 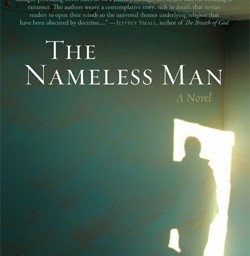 Q. The first question that leaps to mind is: Who the nameless man is, but I know you cannot tell me.

Q. Alright then, spoilers aside, tell us briefly what The Nameless Man is about?

A. L.M.: It is a story of the lengths we will go to heal our wounds and regain our confidence.

It takes place in the present day. The plot is as follows: traveling through the Holy Land, eighteen strangers are forced to take refuge in Jerusalem during a militant attack. Kept in close quarters in an abandoned building, over the course of four days this group of strangers begin a dialogue, discussing love and evil, religion and god; finding amongst their number a mysterious nameless man who poses a revolutionary perspective on these age-old questions.

Journeying on his own pilgrimage as he attempts to come to terms with the violence, betrayal and condemnation of his past, this nameless man reluctantly steps forward to share the realizations he has gathered over the course of his borderless life, leaving those who listened forever changed by the radical transition of perspective his revelations bring about.

Following in the tradition of other contemplative writers such as Hermann Hesse, James Redfield, and Paul Coelho, the authors present us with a reflective tale chronicling one man’s spiritual journey across time and beyond the boundaries of our preconceived notions. The Nameless Man will speak to spiritual explorers of all faiths. The story within is a guide for all those making the transition from rigid doctrine and into the intimacy of spirituality. This adventure will challenge all traditional definitions, widen your mind and ignite your will to take up your own inner-pilgrimage in search of firsthand truth.

Q. In the book you put forth many unique philosophies: that evil is a philosophy/movement rooted in humanity and not a devil; that this world is, as you put it, the post-Revelations world; that there is an ancient consciousness whose identity has been masked by our preconceived notions of God and finally, that there is a Shambala-like or Avalon-like sanctuary hidden at the heart of this earth. How were the philosophies of this story formed?

L.M.: I gathered some of the philosophies over my personal spiritual journey and studies, but the book is not a chronicle of my spiritual path or any one religion. It is a unique tale. The lines of myth and reality blur. It is a novel, so it is truth interwoven with parable.

Q: One philosophy in particular seems to have struck a chord with many readers. The perspective that, as you put it, “It is the presence of love and not blood, that determines familial bonds.” You explore this theme at several points throughout the book.

L.M.: Yes, well, this particular truth has defined a significant part of my life, inevitability it has become a central point in my first novel.

Q. Tell us a little about your philosophy on this matter.

L.M.: Well, as I say in the book, this idea of shared blood denoting a family bond is rather absurd. The coursing blood does not bring love to the heart. The emotional bonds that create a family are not encoded within our DNA. Our blood does not dictate who we shall love or who shall love us. As such, blood does not dictate who we have bonds with. Bonds are created from the presence of love. The depth of the bond is defined by the depth of the love felt. Family cannot be defined by the vein. We must define our family, not by who we share blood with, but by who we share love with.

A man and a woman who create a child are not necessarily the parents of the child? A woman carrying a child in her womb and giving birth to the child does not make a woman a mother. I know this is a different way of thinking but, in the end, what denotes parentage? I would ask you this: what is it to be a mother? Is the one and only prerequisite for becoming a child’s mother the act of giving birth? Or is the woman not required to love the child she bears in order to be known as that child’s mother? Is love secondary to blood? Or is blood secondary to love?

Now, which woman is the child’s mother? Which of the two women has fulfilled what it is to be a mother? Is it the first woman whose only motherly act was that of giving birth, before, in essence, trying to take the child’s life? Or is it the second woman who, while having not given birth to the child, did help bring that child to life? What is it to be a mother? Is it a title that all women who have borne a child can adopt? Or is it not a bond made by the presence of love?

Q: Well, this is certainly a message that is resonating with people at present.

L.M.: Yes, I don’t think it is all that surprising. The search term, “family is love not blood” is what most often leads people to my website. People search this concept online and run across the speech the nameless man makes about this topic in the book.

Q. You say this is a “revised and expanded edition”. What exactly have you changed?

L.M.: With the first edition, I tried to bite off a bit more than I could chew, the book came out rather denser than I would have wished. Readers were overwhelmed by the numerous topics touched on. Marianne and I tried to tell too much of the story in the first edition—make too many points. So, we took a deep breath and decided to thin the book out, with the intention of making a sequel. This allowed us to put off certain points until the second book.

Q. So you decided to do a second edition as a way to set up a sequel?

L.M.: No, originally. It just kind of came about that way.

There is an saying, “One never finishes a project, they merely choose to abandon it.” I couldn’t abandon this project quite yet, not when I knew I could make it better.

You see, I wrote The Nameless Man during my mid-twenties. My writing ability has grown since then, (or at least I like to think it has). Re-reading the novel at thirty, I knew I could make it tighter and give it a better flow.

Q. Tell us a little about the sequel. What is the premise? When might we expect the release?

L.M.: It is entitled, The Other Shore I don’t want to go into too much detail considering many people have not read The Nameless Man. Let just say, we will follow a few of the main characters to the sanctuary of the Other Shore (a place expounded upon within the book) and delve deeper into the journey of the nameless man and his family. As far as a release date goes, I am hoping to release it sometime in 2015 or 2016.