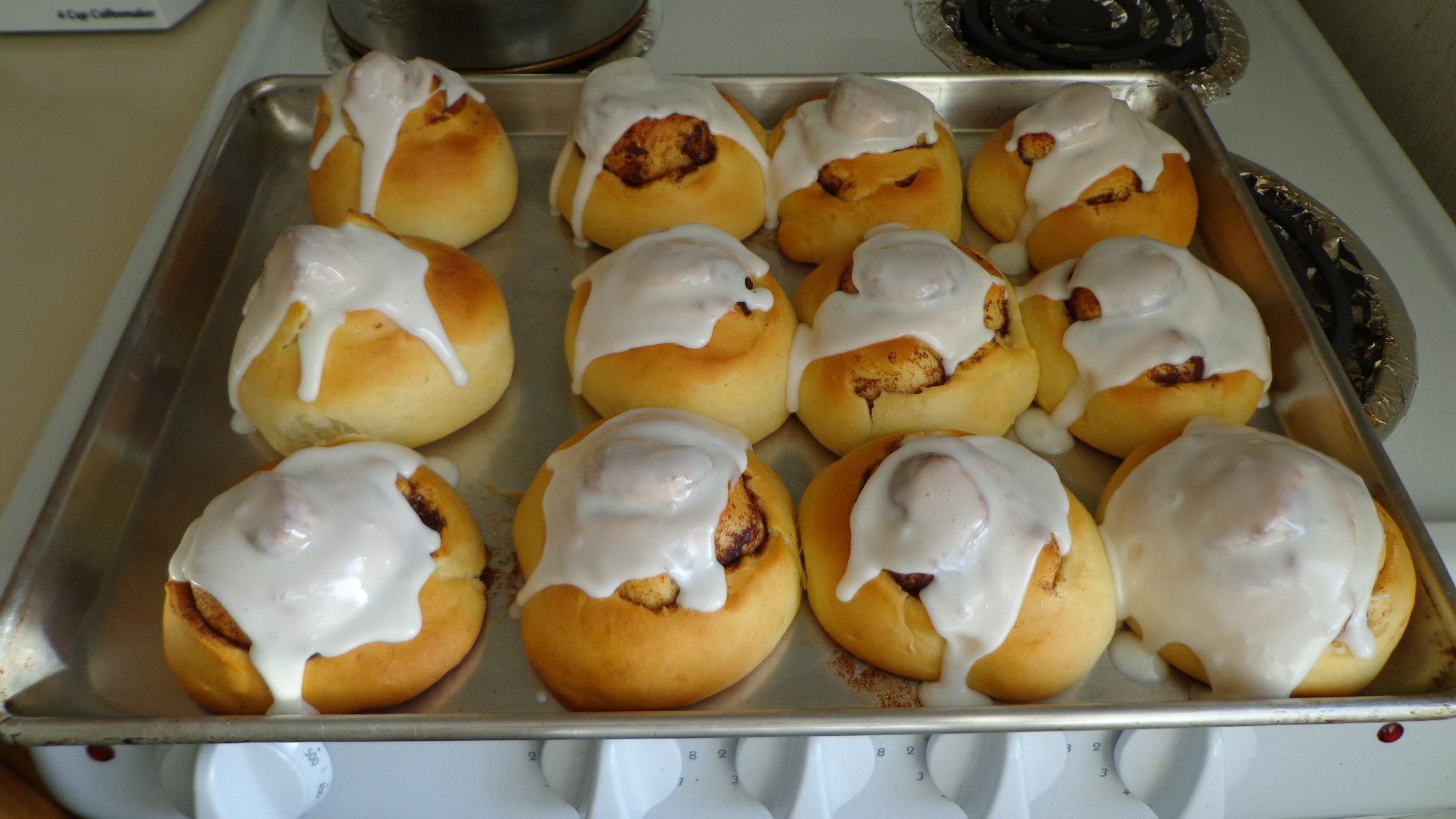 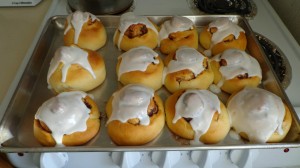 I have found that yeast dough can intimate a lot of people. I will admit that making bread can be a bit tricky. When I was a child, my mother tried to make a loaf of white bread from scratch using a recipe from an old Betty Crocker cookbook. I remember the recipe calling for around 9 cups of flour for a single loaf (a bit much.) Not at all surprising the loaf didn’t come out well. Following the recipe, my mother fed the full 9 cups of flour into a dough that should have only been given 4 cups, put her at a disadvantage from the start. The bread was doughy and heavy. She eventually scaled back the amount of flour but the bread still wasn’t coming out right. We tried again and again with the same flat result. Mom couldn’t figure out what she was doing wrong. After speaking with a friend of hers who baked, she realized the water we were using to bloom the yeast was too hot. (Mom used to bring the water to a full rolling boil in the kettle and then pour it over the yeast, in fact killing the poor little things.)

The point of my story isn’t that we had difficultly but that we kept trying. Making yeast breads is done mainly by feel, therefore it can be a process of trial and error. Making dough isn’t like making cookies; dough requires you to have the courage to venture off the recipe. On damp days you will use more flour than on dry days. On humid days the dough will rise faster than on cold days. But you don’t have to be a professional baker to make a loaf of bread. If you keep at it, you will eventually learn what dough is suppose to feel like and look like at various stages.

When I started making bread in my early 20’s, my family suffer through many flat, doughy loaves but eventually I got the hang of it. Later, I worked as a professional baker and found myself making hundreds of loaves a day. Moral of the story being: Even if you find yeast breads intimating try and try and, if you fail, try again because in the end learning how to make bread is a great skill to have.  Regardless of all the difficulties my mother and I had in our early attempts, making bread with her is one of my fondest childhood memories. I was able to spend the whole day with her working side-by-side in the kitchen as we brought the dough through its stages. I savor the memories of those days—watching the dough rise, the smell of bread baking and the first bite of hot bread dripping with butter.

Cinnamon buns is a sweet way to start your yeast bread endeavors. They make a great dessert or breakfast pastry for the holidays!

To make a slightly  healthier version of this recipe omit egg and shortening by following the adjusted recipe below. I personally do not find a difference in taste between the normal and adjusted recipes so why not cut out a little fat.

Dissolve yeast in warm water and let stand for 5 minutes. During this time your yeast should “bloom” or start to foam. This means that it has been activated and will help your dough rise. If, after 5 minutes, your yeast as not bloomed start over with fresh yeast and check your water temperature. Too hot and you will kill your yeast; too cold and they won’t activate. Aim for a water temperature slightly above body temperature.

After your yeast has bloomed whisk in milk, sugar, salt, eggs, shortening.

With a wooden spoon blend in roughly 2½ cups of your AP flour just to start bringing the dough together. Once the dough has begun to form and pull away from the sides of the blow scatter some flour on a clean counter and transfer the dough to the counter for kneading. During the kneading processes you will add between 1 – 1½ cups of AP flour until the dough is no longer sticky. Once at this stage knead dough for 4-5 minutes.

After you have finished kneading the dough place it in a large bowl that has been greased (use shortening, butter, margin or oil), cover with a towel or plastic wrap and let the dough rise until doubled (roughly an hour). Place the bowl in a warm place to rise.

Step 3: Rolling out the Dough

Once the dough has risen, turn it out onto a lightly floured surface and knead it lightly until all the gas has left the dough. This is called “punching down the dough”. Sprinkle a little more flour on your counter and roll out the dough. You want to make a rectangle roughly 10-12″ x 9″.

At this point it is time to spread our filling. In a small bowl cream together ½ cup butter with 1 tablespoon cinnamon and 1 tablespoon sugar. Spread mixture evenly across the dough.

Adjusted Recipe for Filling: If you do not want to use a butter-based filling lightly  sprinkle your rectangle of dough with lukewarm water. Make a mix of 2 teaspoons of cinnamon and 2 teaspoon of sugar and dust it across your dough. The water is meant to lightly moisten the dough so help make the cinnamon mixture a paste.

Starting on the edge facing you roll the dough up into a log. Roll it tightly to help reduce air-pockets. When you reach the far end pinch along the seam to ensure it closes.

With a sharp knife, cut 1½ sections and place evenly spaced on a lightly greased cookie sheet cut side up. Repeat until the dough is used. Let dough proof in a warm place for 40 mins until buns rise.

Note: I always favor aluminum pans to non-stick. Teflon heats fast and burns the bottom of most anything you bake.

Pre-heat oven to 375° Bake rolls for 22-30 mins. If the rolls become too brown tent them with a piece of aluminum foil.

In a small bowl mix confectioner sugar and roughly 2 tablespoons of cold milk with a  fork. Making glaze is a bit tricky; too much milk and you will get runny glaze too little and you will have a chunky dry glaze. You are aiming for a thick, smooth consistency.

Use as much or as little glaze as you like on the buns. I usually put about a tablespoon on the very top and let it run down the sides.

The cinnamon buns will last 4-5 days. You can eat them cold or re-heat them. Wrap the bun in foil, place a pad of butter on top and heat 10 mins in a 325° oven, which is how it is done in our house.